Cuckolded in Public – By a Lesbian! Part 1 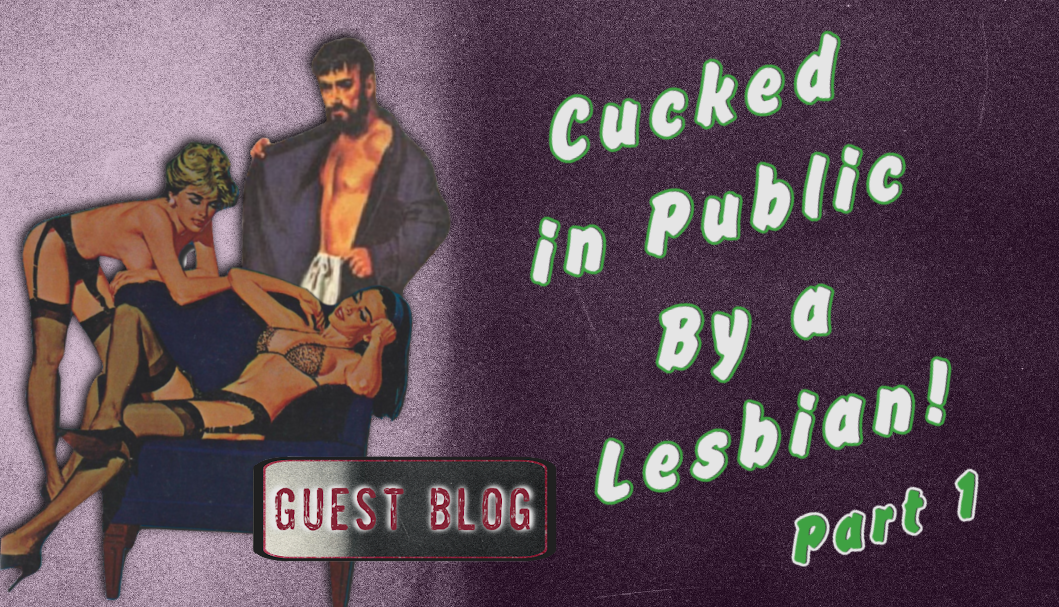 Cuckolded in Public by a Lesbian, No Less!

And our calls have been a lot of fun – especially since he likes to tell me sexy tales about his kinks. All the while wearing panties, of course. His favorite kink seems to be cuckolding and  I was thrilled when he offered to write me a story about being cuckolded in public.

I hope you enjoy Rex’s cuckolding story as much as I have!

My name is Alan and my wife is Kay.  I’m 34 and she is 32.  We’ve been married seven years, and not for want of trying, we are childless.  But we both have successful careers well underway.  I am in the financial services business, on the analytical and strategic side.  That fits my personality better than the sales side, even if that is where the big bucks are earned.  In our firm, the nickname for the most successful group of salesmen is “the big swingin’ dicks.”  Don’t know what that makes me. (Maybe someone who gets cuckolded in public?)

Kay is the Inside Sales and Customer Service Manager for an electronics company.  She has 11 co-workers reporting to her, but like in my business, the Outside Sales guys are the aggressive, macho big earners, and they act it.  Especially at the quarterly Happy Hour that the company springs for.

One Friday every 3 months, her company springs for drinks and appetizers at a restaurant and club near their office.  It is actually a very nice place, a good New American style restaurant with a large club attached.  It offers live music on weekends – mostly dance bands that play covers of classic or soft rock, mainstream country, and a few old Sinatra-era standards.  The club is semi-dark and has a large bar with lots of booths and tables around the walls and a darker dance floor in the back corner. It is perfect for dancing, having fun, and late-night alcohol-fueled groping and grinding. And maybe setting the groundwork for being cuckolded in public.

I’m Still Trying to Decide if it Was Fun

I hadn’t joined Kay at one of these Happy Hours in more than a year.  I worked with big swingin’ dicks every day and I didn’t need to see her company’s version of them hit on all the women.  Even more, I didn’t need to hear any of their stories of past wild adventures.  But last Friday Kay insisted that I meet her there, and said I’d have fun.  Well, I had something but I’m still trying to decide if it was fun.  The fact that I’m not telling you it was not fun probably tells you something about me.

OK, sorry, I know there are things you want to know when you read one of these stories.  I’m 34 like I said and  5’10” 190 pounds.  I have slightly thinning brown hair, and hazel eyes. I’m not hard to look at but I’m not a heartthrob either.  But hey, I did well in my single days and I married way up.  Kay is 5’2”, and about 124 pounds with natural brown shoulder length hair with added butterscotch and lighter streaks right now.

And Oh, Those Tits!

She is naturally pretty even without makeup, but drop-dead when she goes all out.  Those hazel eyes have a real “I’m damn fun” twinkle to them (she is), but it is her body that drives me and most of the male population wild.  She is not as thin now as in pictures I’ve seen from her college days, but the curves make her even sexier in my opinion.  And, oh, those tits!  Perfect for cuckolding in public!

Being short, they appear even larger and everyone notices, whether they admit it or not.  The first time we had sex and she moved on top of me and I looked up at those tits, then up at her face with her eyes shut concentrating on grinding on me just the way she wanted, then back to those tits swinging and swaying.  Well, I was in lust and in love.  But back to the current story!

For a few weeks before that Friday, Kay had told me stories about the new IT Manager at her company, a woman called DD.  At first, Kay told me funny stories of the reactions DD was causing at the office.  Seems DD is, in my wife’s words, “an upfront, no bones about it lesbian.”  Kay told me that if any man at the office said the things DD said, told the stories she told or spoke in such an openly suggestive way, HR would have the poor guy on the carpet in no time.  But with DD, everyone apparently enjoyed the whole dirty talk from a woman thing.  I agreed it was pretty funny, but looking back I hadn’t realized that in the last few weeks the DD stories had stopped. I really should have known that I was about to be cuckolded in public.

So that Friday morning, Kay showed up in the kitchen ready for work wearing a denim skirt and light summer button-front cotton top.  I thought the skirt was a little short for the office and I told her so.  She just said it was blue jeans Friday, but too hot out for jeans.  As she stood at the sink filling her travel mug with coffee, I came up behind her and lifted the back of the skirt.  She laughed as she slapped back at my hands, but not before I saw she was wearing red bikini panties.  I remember thinking that I hope no one else saw what she was wearing under her skirt. 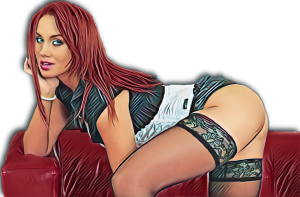