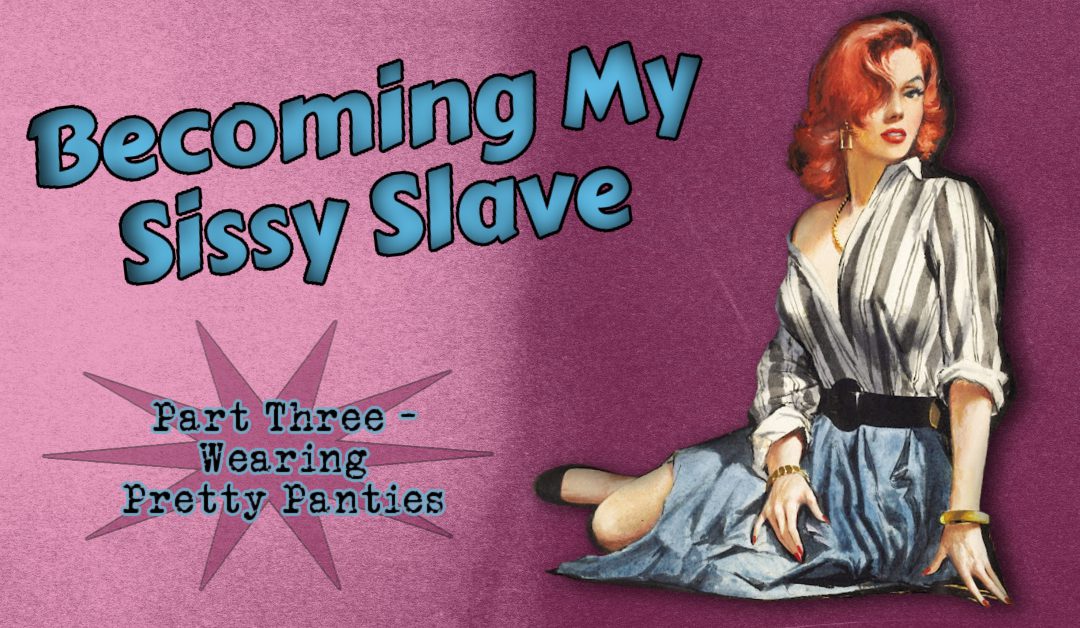 The first things I saw were about ten pairs of panties.  All of them were the same style but in what must have been in every color they were made.  They were really nice and very pretty – made with satin and lace. I hadn’t really thought much about what kind of home you lived in, but I was impressed to find that it wasn’t a messy bachelor pad.  But then, I remembered that you weren’t 25 anymore.   And you were, in fact, a Division President at our company. Apparently providing you with the means to afford the meticulously restored mid-century modern house that I was standing just inside of.

I was even more impressed when you told me that you did a lot of the renovation yourself.  The thought of a submissive, sissy man who can also get shit done is actually pretty sexy, it turns out. Even if all of these things are accomplished by a panty loving sissy slave in a chastity cage.

Sparking So Much Joy

Speaking of panties and chastity cages, you led me up to your bedroom and opened up a drawer.  Then you invited me to look through it.  The first things I saw were about ten pairs of panties.  All of them were the same style but in what must have been in every color they were made.  They were really nice and very pretty – made with satin and lace.  But they were also surprisingly comfortable.  I knew this because I had them in black, myself.

As a panty loving sissy slave would, they were all folded Marie Kondo style in the drawer and it looked like one pair was missing.  I also knew that they came in bright pink, which was not there.  “Hey – where are the pink ones?” I asked.  When I turned around, you had turned bright red again and I realized that you were probably wearing them.  And I was right.  You asked if I wanted to see them but I declined.  I wasn’t quite there yet.

Moving on from the panties, I found some really cute lace bralettes.  “Wow… bras must look really silly on a flat-chested man,” I remember thinking.  I could understand panties but a bra?  But, as I pulled one out and looked closer, I realized that bralettes were perfect for guys since they were only made of stretch lace.   “Nice choice,” I said, only half sarcastically.

Panty Loving Sissy Slave With a Bag of Butt Plugs

Next, in your perverted treasure chest of a dresser drawer, I found a zippered cosmetic bag.  Naturally, I thought it was full of makeup and I was curious to see what brands you used.  Probably classic and elegant, I imagined.  “Wait…” you said as I unzipped it.  I looked inside to find several butt plugs in wildly varying sizes.  I didn’t mind pulling them out one by one to look at them since I was certain they were sparkling clean like everything else in my panty loving sissy slave’s house.

“Did you have any idea what you were buying when you got these?”  “No, not really,” you said in kind of a sheepish way.  “I just bought one in every size but I haven’t used any of them yet.”  “Buying them in every size seems like a pretty good idea, actually,” I replied, encouragingly.  I then fished around in the bag until I found a sample of lube which I handed to you along with the smallest plug in the bag.

“Okay, panty loving sissy slave, go into your bathroom and put this in.  It shouldn’t be any trouble if you use a lot of lube since it’s so slim.  And when you come out I want you to be wearing only your pink panties and the butt plug,” I directed.  “Yes, Ma’am” you answered and hurried into the bathroom to do my bidding.

After a few minutes, you came out of the bathroom and asked “should I keep the matching bralette on too?”  “By all means,” I said as I noticed that the bra and panty set looked oddly good on you.  Especially considering that they weren’t made for men at all. You were no longer red-faced or embarrassed about your lingerie – you just looked kind of happy.

I asked about the butt plug and you said that it went right in with no problem so I told you to leave it in until the next morning.  You were still standing in the bathroom doorway when I picked up a heavy, phallic-shaped locking cage that I now know is a chastity device.  “Have you ever used this before,” I asked?   You said you hadn’t tried that out either.

Then, I asked if I had seen everything that you had.  You said that yes, everything was in that one drawer.  And so, I just had one more thing to say: “Before we go any further, I need to see your cock.”

Well, my sexy perverts… What did you think about part three?  And why do you think that our Mistress asked to see her panty loving sissy slave’s cock?  But more importantly, what do you think she’s going to find? And I still want to know if she spent the night!   Let me know what you think in the comments below!

Not sure what’s going on here? Head over to Part 1 – A Sissy Slave Boss and read from the beginning.

Want to know what’s new here at the Empire? Head over here to find out!