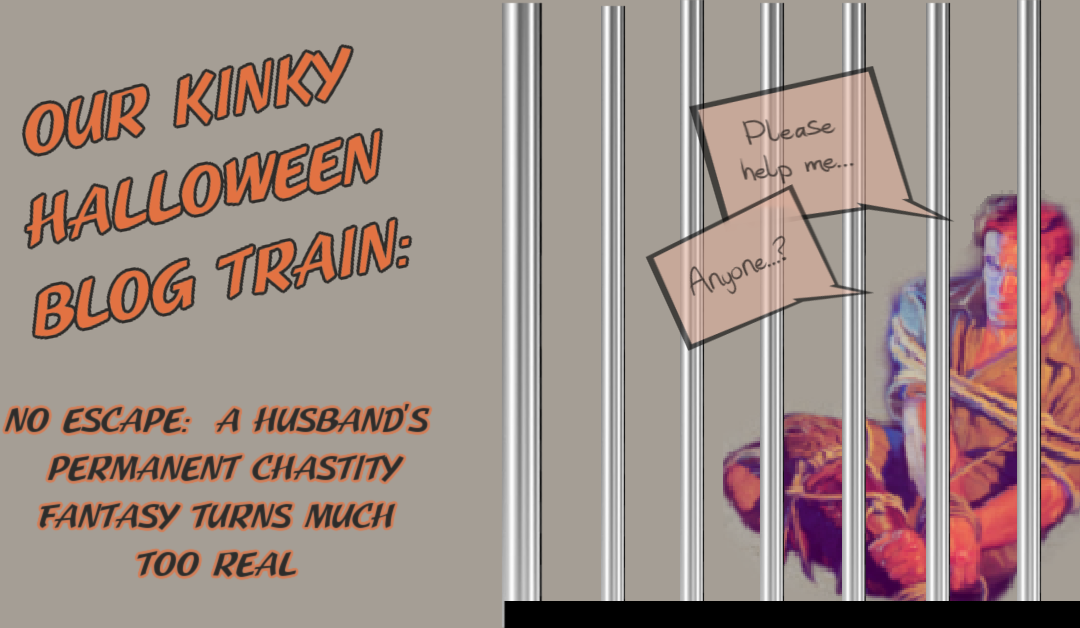 The night before Halloween my husband had begged me to unlock him even though he knew he wouldn’t be allowed a release.  It had been months since his last orgasm and there was no end in sight to this denial period.  He had become so used to being denied that he was starting to crave edging as his only form of pleasure since even a ruined orgasm seemed like an unattainable dream.

I agreed to unlock him and to put him through his usual torturous edging session.  My sadism along with his desire to please me had turned him into quite the masochist.  The ritual started with me tying him down to the bed and then unlocking his very secure chastity cage.   I had the only key and I kept it on a silver ankle chain.  He was always a very good boy and I didn’t think he would ever try to unlock himself without permission.  But keeping the only key away from him reinforced his submission to me and his kinky chastity fantasy.

He Was Quite The Masochist

His bondage and release from his penis prison were followed by a merciless hand job that kept him right at the edge for over an hour.  I loved straddling him, completely naked, and hearing the pitiful begging for release which eventually turned into desperate pleas for me to stop when it became too much to take.  These sessions were extremely difficult for him but he had never once made a mistake and orgasmed without my permission.

Since my sadism had practically no limits, I always added fun little things to make these kinky chastity fantasies even more difficult.  One of my favorites was to lean over with my breasts and hard nipples that he wanted so badly just out of reach of his lips and tongue.  And it was so satisfying making him groan when I teased him by brushing them over his lips, pulling away just out of his reach before he could get even a tiny tasted.

Afterward, we laid side by side on the bed and his mind was still in an altered, trance-like state from the long, intense torment that I had just subjected him to. Not at all in his right mind, he confessed that he would be happy to never cum again and only feel the pleasure and frustration of edging.  “Are you sure about that, sweetheart?” I asked.  “You never want to have another orgasm? You know that means permanent chastity, right?” I asked.  And from the depths of his subspace and edge addled-mind, he mumbled “yes – that’s what I want.  Please lock me up forever!”

When he floated back into consciousness, he was completely spent physically.   I told him, “you expend so much energy during our sessions.  All of the thrashing about against your restraints, the begging, the struggle and self-control you need to hold back from orgasm leave you panting, sweating, and full of adrenaline.” “It’s too bad there isn’t a way to harness that energy and put it to use as electricity that could power the city.  That would probably even be considered green energy,” I teased.

He laughed nervously, even though he didn’t have any way of knowing that there had indeed been secret studies done involving that very subject.  The whole concept had been deemed completely unethical and illegal.  There were, however, rumors of an underground company that had managed to put this into practice and was selling electricity on the black market.  That sounded like a very dark kinky chastity fantasy.

As I tucked him back into his cock cage, I asked, “are you looking forward to the Kinky Halloween Escape Room tomorrow?  It’s got great reviews and it’s supposed to be very sexy and a lot of fun.  Don’t forget that I got us tickets.  I have a feeling that you’re going to love it and that it might even be life-changing for both of us!”

What Did You Think?  This Isn’t The End!

Well, my sexy perverts… My kinky chastity fantasy story ended up way too long for one blog post so I’m going to publish it in three parts.  What do you think so far?  Let me know what you think in the comments below! And look for part two soon!

Then, if you want to read another one of my stories, head over to Sissy Slave Boss .

Read what others have said about me on my review page

Or, even better, tell everyone about our amazing time if we’ve had a call together!

Want to know what’s new here at the Empire?

Head over here to the Enchantrix Weekly to find out!